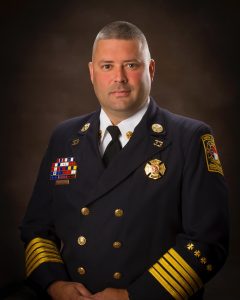 A committee appointed by the IAFC selects the award recipients, evaluating the nominees based on leadership, innovation, professional development, integrity and contributions to the fire service as a whole. Sponsored by Pierce, the awards will be presented July 27 during FRI’s general session at the Charlotte Convention Center in Charlotte, N.C.

“The leadership and integrity modeled by Chief Wade and Chief Riggins are truly an inspiration to us all and to the fire service, reminding us of the crucial function of fire departments in society today,” said Jim Johnson, Oshkosh Corporation executive vice president and president of the Fire & Emergency segment and Pierce Manufacturing. “Together, these leaders have nearly 60 years of dedicated service to their departments and the communities they serve. It is an honor to bestow these awards, and all of us at Pierce congratulate Chiefs Riggins and Wade!”

Both honorees are highly accomplished individuals with impressive career, educational, and certification credentials as well as civic involvement; their commitment to the fire service and their communities is evidenced by numerous awards they’ve received and the accolades offered in support of their nominations. Following are just a few highlights.

Chief Wade joined the North Lenoir Fire & Rescue department in 1996. He began as firefighter and rose through the department ranks as a captain, battalion chief, and assistant chief before being named fire chief in 2010. Wade graduated with honors with an Associates of Applied Science in Fire Protection Technology from Wilson Technical Community College, and earned a Bachelor of Science degree in Fire Science with a concentration in fire service management from Fayetteville State University. Wade has always been a strong supporter of training and certification. He was named, in 2013, a Fire/Rescue Training Specialist by the North Carolina Office of State Fire Marshal, for whom he has led training programs across the state. He also served as a fire and rescue instructor for a decade at Lenoir Community College. Wade sought to make training a priority in the department, as well. The department, under the leadership of Chief Wade, is creating one of the premier training facilities in the region – complete with a dedicated flashover simulator, T-box burn simulator, and a training tower. More recently, Chief Wade is implementing an officer and leadership development program to cultivate the growth and skills of his fellow department members. As fire chief, Wade has advanced the department’s mission and enhanced its community engagement efforts. An outstanding communicator and writer, Chief Wade secured Fire Act Grants for his department in 2007, 2009, and 2014 totaling more than $900,000. Chief Wade’s accomplishments have not gone unnoticed: in 2016, he was recognized as the IAFC Southeast Region Volunteer Fire Chief of the Year. As Wade received this honor, George Smith, III, the president of North Lenoir Fire & Rescue, in acknowledging the legacy Wade will leave the department, noted that “the fire service desperately needs more leaders like Chief Wade.” A shining example of leadership in action, Chief Wade is a deserving recipient of Volunteer Fire Chief of the Year.