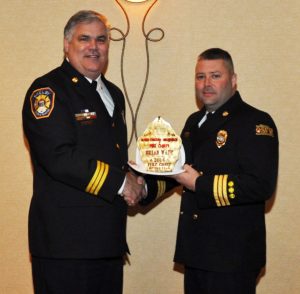 North Lenoir Fire & Rescue Chief Brian Wade has been named the 2016 North Carolina Volunteer Fire Chief of The Year by the North Carolina Association of Fire Chiefs. The award is the most prestigious honor the NC Association of Fire Chiefs can bestow upon a Chief officer and was conceived to recognize truly outstanding Fire Chiefs whose actions and leadership in their profession, home, community and country, serve as an example and challenge for all other Chief fire executives throughout the southeast.

“Brian has long exemplified a level of commitment to our department, our community, our state and the fire service that can serve as a model to others,” said Chris Decker, NLFR Public Information Officer. “He clearly recognizes the impact that the fire service has had on his life and career, and he has been aggressive and unselfish in giving back to others, both professionally and in his personal life.”

Brian has served as the Chief of North Lenoir Fire & Rescue since 2010, and has been a member of the department since 1996. Chief Wade also began working with Wilson Fire & Rescue Services in 2003 where he rose to the rank of Lieutenant before leaving to take a position with the NC Office of State Fire Marshal in 2013.

“I believe this award is very fitting and well deserved in recognition for Chief Wade’s commitment, dedication, and sacrifices that have been made for our district and the fire service,” said Franklin Floyd, NLFR Treasurer.

NLFR Chief Brian Wade expressed his appreciation for receiving this honor. “Being considered for this award among such a great group of individuals is an honor and a very humbling experience,” Brian said. “I am thankful for my family that allows me the time to do what I love, and to my North Lenoir family for allowing me to be the leader of such an exceptional group of community servants. I am also thankful to my Dad for always being the best role model. This one’s for you Broom!”

Chief Wade will be submitted as the North Carolina nominee for the International Association of Fire Chiefs Southeastern Fire Chief of the Year.

The mission of the N.C. Association of Fire Chiefs is to provide a wide range of programs designed to meet the needs and enhance the skills of fire service managers, according to the newsletter, so they may better protect and educate the fire service and public from the adverse effects of fire, sudden medical emergencies or exposure of dangerous conditions created by either man or nature.

Several NLFR firefighters gather outside of the La Grange Guns-N-Gear store while working to contain a structure fire at that location on Tuesday night.