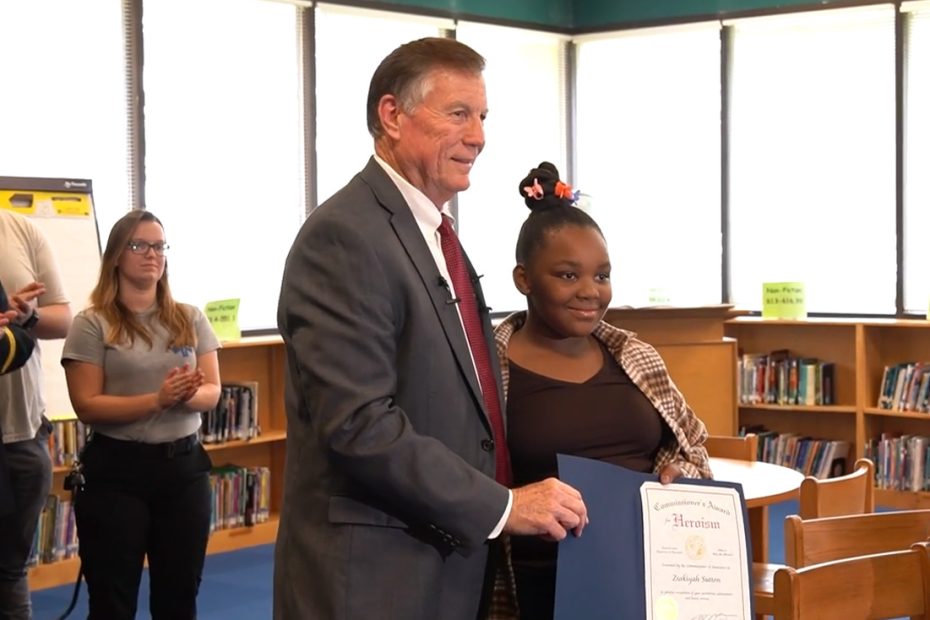 Mike Causey, North Carolina Insurance Commissioner and State Fire Marshal, presented Zsakiyah Sutton with a Commissioner’s Award for Heroism for saving her younger brother’s life during a fire in her home at an award presentation at Rochelle Middle School in Kinston, NC on Wednesday, October 26, 2022.

In the very early morning hours of Sunday, November 21, 2021, Zsakiyah was awakened by thick smoke and flames in her home on Water Chestnut Drive in Kinston, NC. She quickly oriented herself and took swift action to locate her 1-year-old baby brother, Jamir, and safely remove him from the home. She then made multiple attempts prior to fire department arrival to re-enter the structure in an effort to locate her other brother, Qwa’Jay Briscoe. Sadly, heavy flames and smoke prevented Zsakiyah from reaching him and her 8-year-old brother ultimately succumbed to his injuries. Their home was a total loss.

Zsakiyah exhibited bravery in the face of danger and risk of bodily harm to save her brother’s life. Our department and our community are extremely proud of her, and we would like to thank NC OSFM and Commissioner Causey for recognizing Zsakiyah for her heroism.